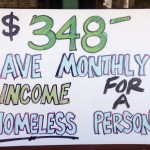 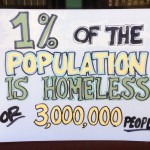 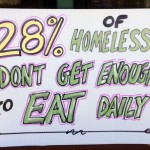 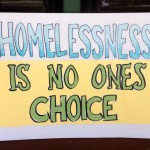 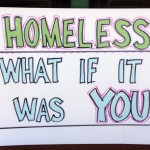 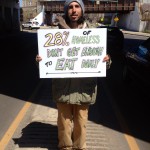 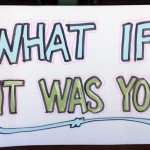 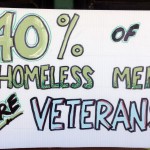 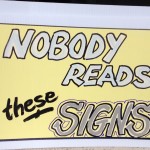 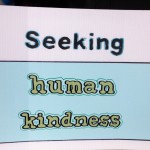 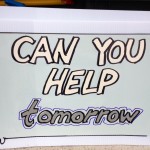 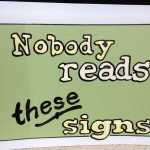 The signs homeless use can be very personal.  To hold the sign is called “flying” the sign.  The signs are handmade or given by friends with marketing in mind.   The purpose of the sign is survival, to earn more while panhandling. Sometimes the signs they fly could be considered “lucky”, sometimes there seems to be no rhyme or reason why one sign may make more money than another.  Its a complicated correlation between the location, the weather, the person panhandling and their “look” and the sign they fly.  In the community of Logan Square, Chicago these signs are similar to other signs being held by those panhandling all over the Untied States. They are usually made from found brown card board or repurposed, discarded signs. These brown signs with the black sharpie lettering become invisible along with the people that are holding them.

What would happen if the people panhandling somehow changed the “brand awareness”?

What if the signs were constructed with the same attitude as advertisers use in the way of marketing their brand or refreshing the brand.  Defined by Wikipedia, Brand awareness is the extent to which a brand is recognized by potential customers, and is correctly associated with a particular product. Expressed usually as a percentany of the target market, brand awareness is the primary goal of advertising in the early months or years of a product’s introduction.

Brand Image is defined as, The impression in the consumers‘ mind of a brand’s total personality (real and imaginary qualities and shortcomings). Brand image is developed over time through advertising campaigns with a consistent theme, and is authenticated through the consumers’ direct experience. (businessdirectory.com)

This image can be positive of negative or completely disappear in the case of the signs the homeless fly.   I propose If the majority of the signs panhandlers use in the same community were approached in a different manner, the signs would become visible, at least for a short time.

Im making some new signs to see if my idea is correct and will be delivering them today on April 26, 2014 with the care bags for this week.  The signs will be colorful, hand painted on coroplast (a form of corrugated plastic sign makers use) The signs will be durable and fold up for storage. The signs will have similar tone and color, eye catching, thought provoking.  The signs will contain a short statistic about panhandling or homelessness.  The hope is the signs will make the invisible, visible to the passers by with new imagery.   The same way we identify with thousands of brands everyday like Target, McDonald’s and Starbuck’s, so to is a feeling portrayed from a standard brown card board sign from a person panhandling.  The new signs may lead the person to make more money as well as help bridge the gap by helping  the public understand what its like to be homeless or some statistical information they weren’t aware of.  I hope the information gives thought to those that drive by.

When I was collecting donated firewood with Meegan Czop at ReBuilding Exchangeher boyfriend and I had a conversation about a sign which a man panhandling was holding. The sign read, “Nobody reads these signs”. He was discussing the impact the sign had on him. He went on to say he talked about it with his friends and thought about its meaning often. I couldn’t believe it. I told him, “I made that sign!”. The odds of this conversation taking place…It was such a good moment to hear that a sign served its purpose and had some type of impact. I had made about 15 signs last April and presented to the homeless to see if they might be interested in using them. I thought the signs could possibly make them more money and in my wildest dreams, the signs would make people notice them and think. Then a few days ago I was working for a new customers, Amy and Scott. I brought them a care-bag as I always do for people I meet under certain circumstances. Amy told me about a man that panhandles on a California/Diversey exit ramp. She talked about his face and the “everyman” qualities he possessed. She then brought up a sign that he was holding (flying) that hit home for her, “Homeless, what if it was you?”. She told me about the financial situation they were in at the time and she made a connection to the sign James was holding. The sign had a big impact on her, so much so that she has been working on an essay about it and what she experienced. Again, I couldn’t believe what I was hearing…”I made that sign!”. You have to understand, I made these signs a year ago in April and I have only heard some minor feedback from them, maybe once. Most of these signs weren’t used more than a couple days by the homeless for a number of reasons. Some felt discomfort away from their normal brown cardboard signs with the black sharpie marker. Typically their signs read “homeless”, “please help”, “god bless”, but I wanted to create new, durable signs in some effort to “re-brand” away from the brown signs to something people might notice and think about. I imagined people viewing the new colorful signs with lingering thoughts about how they were made, the “whys”?, the “whats”? and the people holding them. I hoped people would see them for people instead of ignoring them. I hoped passers by would not only give more but think about the homeless and put themselves in their shoes. A year later I am having these two separate, completely organic conversions, meeting two people by chance, in the city of Chicago. Hearing about the impact they made on them a year later just blew my mind. Amazing.
I spoke to James today and he still holds the sign I made for him. Its worn now but he still uses it. I told him about Amy in hopes that he would know people are thinking about him and the message. Its a rare moment to be able to give feedback to him about this; all the things that had to transpire for that to happen. It was a pretty great day. I want to make more signs. I cant wait to tell Amy I spoke to James and I hope someday I get to read the finished essay shes working on.