July 27, 2014, week 64 of making and delivering care bags to the homeless of Logan Square, Chicago. As of today 342 care bags full of nutritious snacks, toiletries and assistance information have been delivered.

I’ve added a map of a typical delivery day of the care bags. I made 6 bags this week, giving one to a possible new client of mine. I try to take advantage of those opportunities. There’s value in exploring the contents of the bags for the clients. They can either consume the bags themselves within the mind set of the bags function or decide to deliver the bags themselves in their neighborhood. Both are of equal value and create an opportunity for empathy. Have a great day everyone. 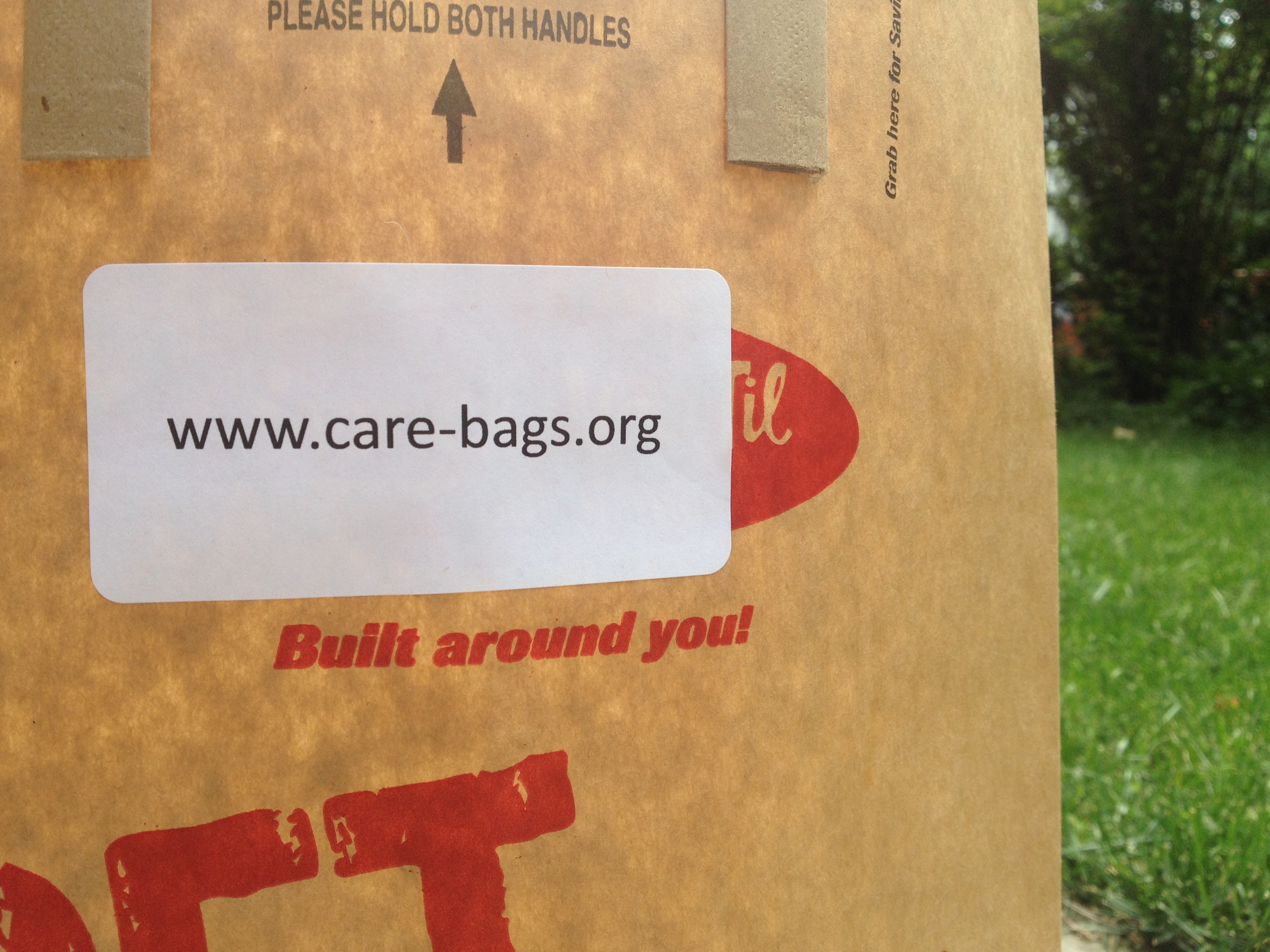 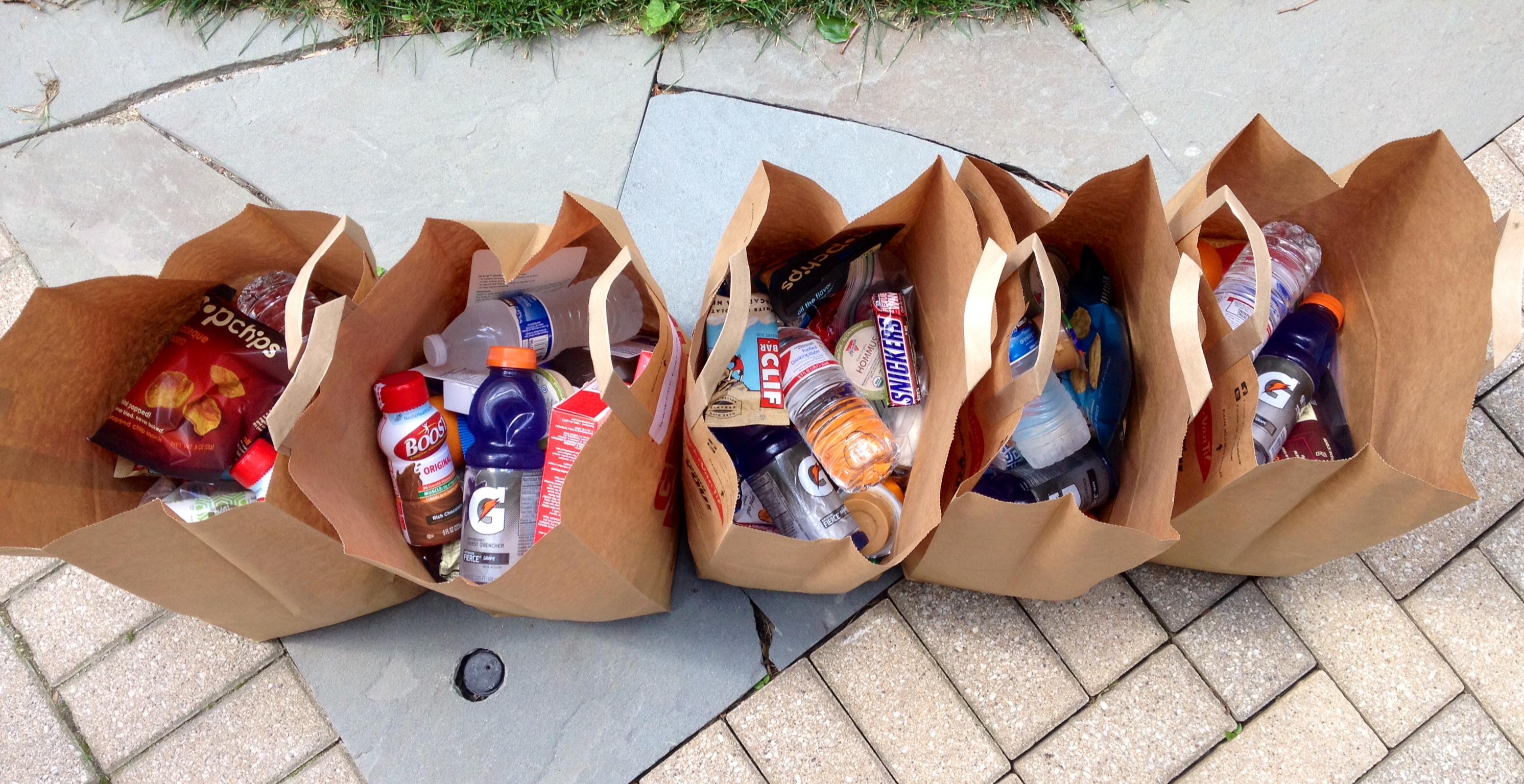 July 20, 2014, week 63 of making and delivering care bags to the homeless of Logan Square, Chicago. As of today 336 care bags full of nutritious snacks, toiletries and assistance information have been delivered.

Roger told me he called from a different number than the one I had programmed in my phone, I missed his call last week.  He didn’t leave a message so there was no way to know who it was.  He wanted to take me up on my offer to take him to Revive Center for Housing and Healing.  We talked about it and he will call me again.  I’m so sorry I missed his call, I know how difficult it was for him to make the call in the first place.  He has a couple of phones, a pre-paid phone and a government phone, both had dead batteries.  I thought it was a testament of the trust he has, allowing me to take the phones home with me and charge them, then deliver them back to him a few hours later.   Its those moments that remind me how far relationships can develop over time. I’m convinced consistency and honesty is how to get there.  He had no hesitation when I asked him if he wanted me to charge them.  He dug around his back pack for the two chargers, both with neatly cords held together with a rubber band.  I asked him how he charges these phones normally and he told me how he “sneaks” around to charge them.  The rubber band on the one charger was melted a bit and brittle, breaking when I tryed to unravel it at  my place.  It seems that charger hadn’t been used in a while.

Where Roger sleeps all year. Location is adjacent to a large dumpster behind a fast food restaurant.

I also met a new couple named Dan and Lucy this week.  Dan has been recovering from knee replacement surgery on his left leg and several surgeries to his right ankle.  He has the word “Lucy” tattooed on his left calf.  They told me they are “just about homeless” and having a really hard time.  Hard enough financially to panhandle.  Lucy does the panhandling as Dan watches from the sidewalk, unable to stand for long periods of time due to the surgeries.  They would be a great couple to interview.  I’ve never seen them before and hope things turn around for them. They were happy to get a couple cold drinks on the hot day.  Dan told me he asks God for help, no too often but the past couple times he asked, they found a $20 bill on the ground and then he said he was thinking how thirsty he was and then I showed up with a couple cold drinks.  I’m happy he has his faith, I can see the strength in it for him, even though I’m an Atheist/Agnostic.  Faith plays a huge role in getting through the difficult times, especially when your on the streets.

July 13, 2014, week 62 of making and delivering care bags to the homeless of Logan Square, Chicago. As of today 331 care bags full of nutritious snacks, toiletries and assistance information have been delivered.

I met someone new today.  I have seen this young man outside of the local Costco, at a nearby intersection.  Hes young, in his 20’s probably.  When I have seen him he appears destitute and either high or going through withdrawal sickness.  Hes panhandling at a different location today, at the Damen and Elston intersection, next to Roger.  His name is Mike and was very appreciative of not just the care bag but the effort to give him one.  I introduced myself to him today and gave him a few dollars.  Roger didn’t call me last week but said today he will try to call me Wednesday to take him to Revive Center.  I hope he does, but all I can do is extend the offer to take him and free myself of any judgement if he decides he can’t go through with it.  Something interesting happened with James today (Diversey and California).  I had to put my “flashers” on and quickly deliver the care bag to him as he sat at the bus stop.  I said “Hi James, I have a bag for you”…  He said thank you and I told him I’d see him soon.  There was a girl at the bus stop as well.  She didn’t appear to be homeless, just catching the bus.  When I circled around after delivering a couple more care bags, my route takes me past James again at the bus stop.  He was giving the bag to the girl at the bus stop.  There’s all sorts of possibilities as to why.  Maybe he took what he wanted and gave the rest to her?  Maybe she asked him about the bags and care-bags.org and he gave her the bag with the web address on it; though I think that unlikely since it is such an easy web site to remember.  Maybe James is just generous? 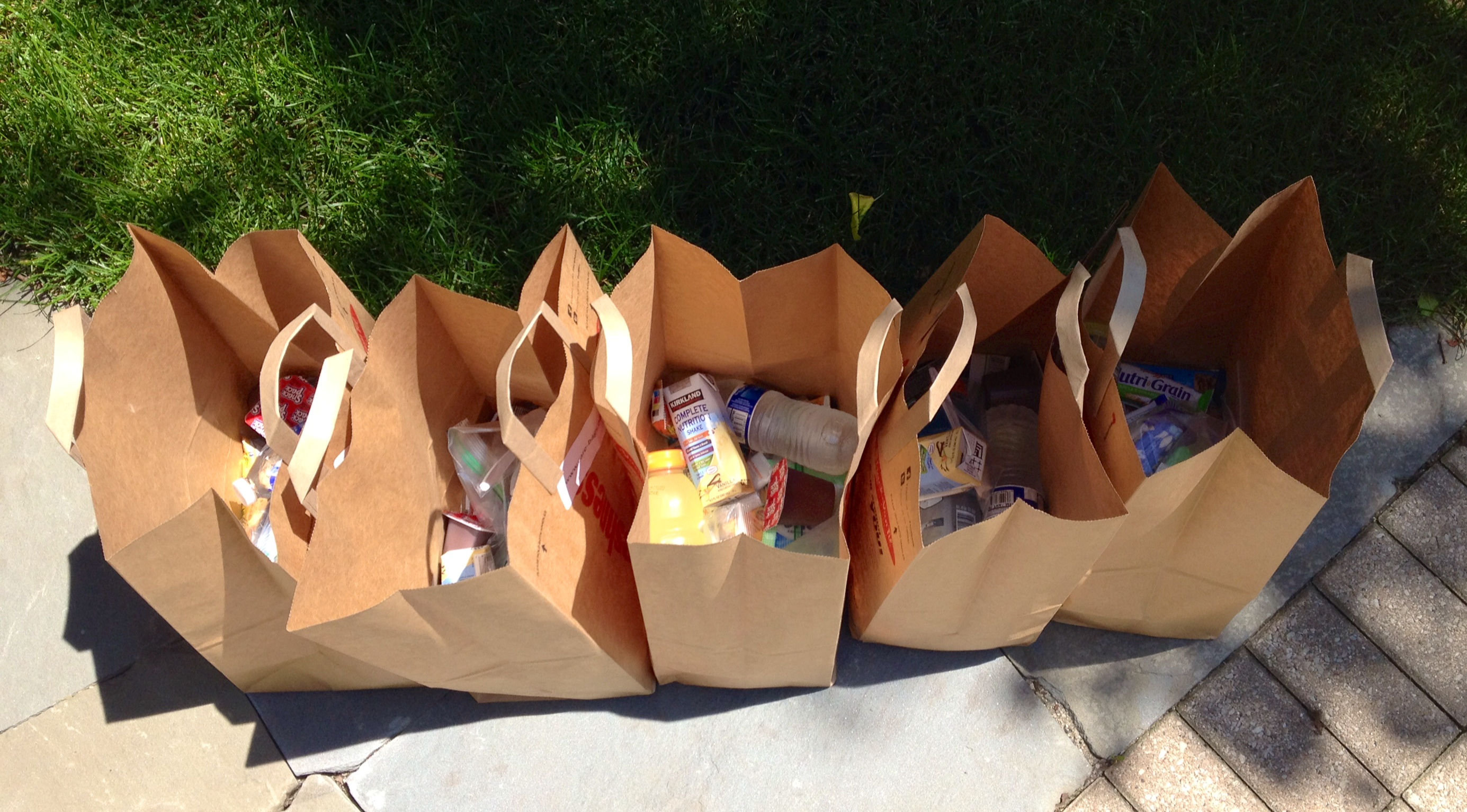 July 8, 2014:  Its been a great, fulfilling week.  Teresa was out panhandling to make some money during her rehab and stay at Safe Haven.  It was good to see her, knowing she is clean from heroin and gaining some weight.  Today I dropped off a reference letter for Nic.  He asked me for the letter to help facilitate him gaining access to a rehab program.  Hopefully the letter detailing my knowing him the past year will help in some small way, even if just to give him a boost from reading the letter himself.  Michael is still in great pain from his wisdom teeth causing damage to his molars.  I picked him up a large bottle of ibuprofen to try to curb the pain but is such a tiny “band-aid” on a larger problem.  My thoughts go mostly to Roger.  I’ve known him for so long, I see him more than I do my friends.  I’m lucky if I get to see my friends weekly like I do these guys.  I’ve been talking to him about the Cathedral Shelter of Chicago, now Revive Center for Housing and Healing for months and months.  I have a great relationship with that organization and I feel they could help Roger out.  They can provide housing, rehabilitation services as well as clean clothing and food and medical assistance, though there is a waiting list.  Usually I make it a rule to hand out a bus pass or two so they can go on their own, never driving them myself.  I never want anyone to feel they have to go “for me”.  With the bus pass I feel if they do go to get help, they are doing it for themselves.  Roger is an exception though, I told him I would take him, make introductions and wait for him, then return him when hes finished.  I really hope they can help him.  Today he told me about the rats that have been bothering him.  I suspect this has been going on for a long time.  Ever since he was caught and locked out of an abandoned building, he has been sleeping between two trees next to a fast food restaurants dumpsters.  He often wakes to rats crawling on his body.  He pushes them away but they keep coming, getting more and more aggressive.  I cant begin to imagine what that must be like. He needs to get off the streets. Hopefully I’ll have some good news for everyone concerning Roger by the end of the week.

July 3, 2014, week 61 of making and delivering care bags to the homeless of Logan Square, Chicago. As of today 324 care bags full of nutritious snacks, toiletries and assistance information have been delivered.

The bags this week contained more t-shirts, toiletries such as soap, lotion, chapstick, sunscreen, wet wipes, tissue, shampoo and conditioner and the usual assortment of drinks and nutritionally dense ready to eat items. I’ve been thinking I’ll probably stop marking the weeks and number of care bags delivered. Making and delivering these bags is something I want to do forever and I cant see myself stating, “week 3024…” By this point, I’ve seen people come and go on the streets of Logan Square. I’m happy with the relationships that have been fostered from making these care bags, both on the streets and off. Please visit care-bags.org to keep up with these relationships, the interviews and how to make your own and deliver them in your community. 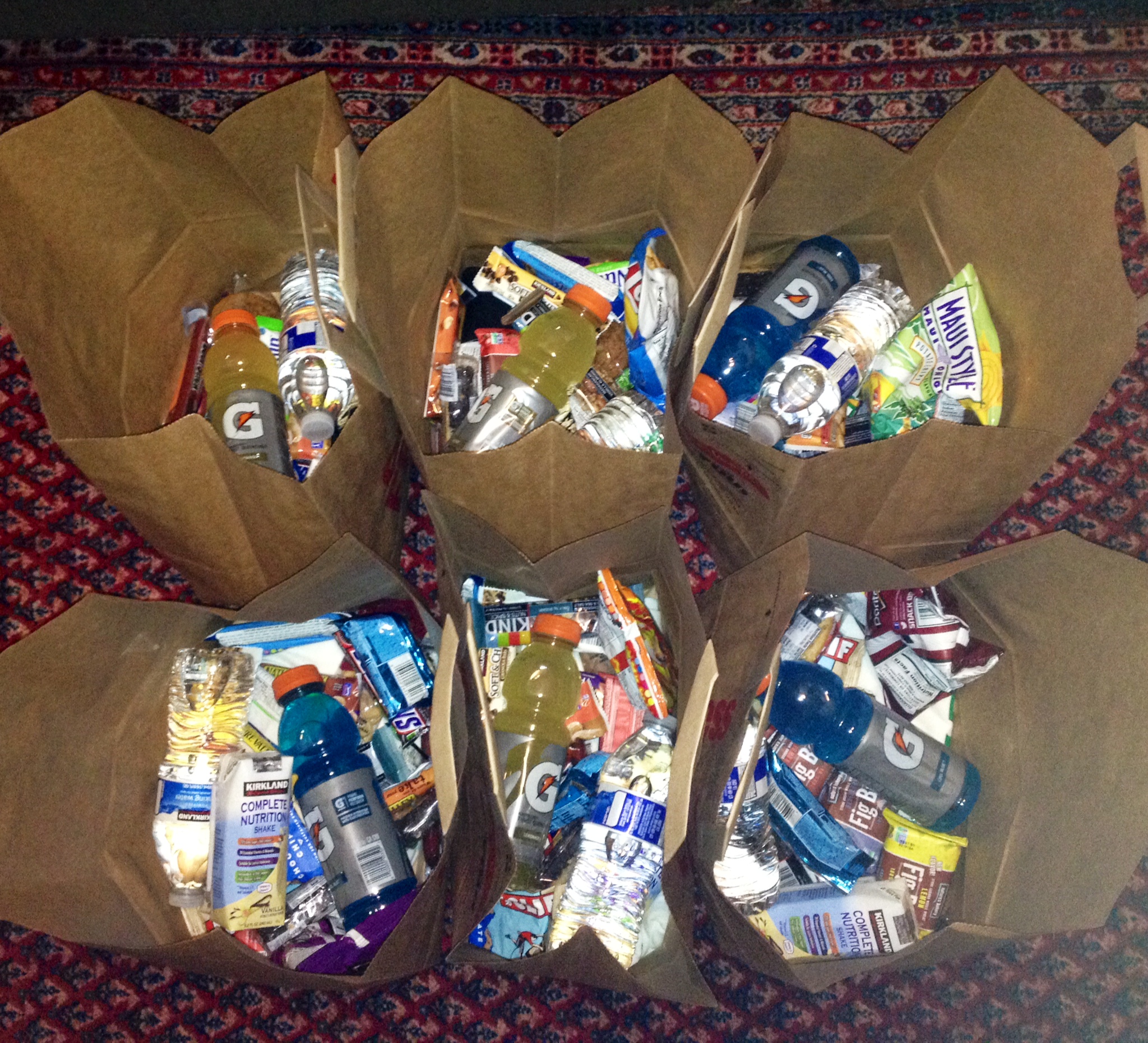